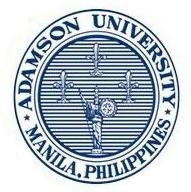 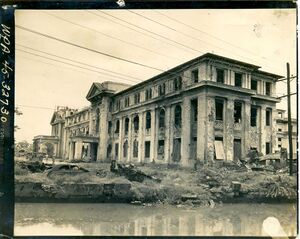 Adamson Ozanam Educational Institutions, Inc., was founded by George Lucas Adamson and Alexandar Athos Adamson in 1932 as a school of Industrial Chemistry. After World War II, in 1948, the University rented the buildings owned by the Vincentian Fathers (Congregation of the Mission) at San Marcelino Street, Manila and stayed there until 1964 when the priests took over the administration of the University. At that time there were only 4,000 students; after 34 years of Vincentian administration the school population reached 22,000 students.

Although Adamson University was founded as a secular school, when the Vincentian Fathers took over, they introduced several important religious programs to place it in line with the general ideals of Catholic Education. A theology department was opened, campus ministry was strengthened, Masses were held daily, religious icons and celebrations were introduced on the University campus. These diverse apostolic activities were based not only on the various guidelines from the Holy See which looks at education as a most important apostolate but also from the experiences of Vincentian Universities around the world (e.g. St. John's University in New York and DePaul University in Chicago) and the apostolate of the Seminary-colleges before World War II.

After the Vincentians took over the University, twelve units of theology courses were required for graduation. This means that a student had to stay in class for around 150 hours before he is given his graduation diploma from Adamson University. During a particular semester as many as 8,000 students are taking one of the four subjects in theology: Introductory Course in Theology, The Bible, Dogma and the Sacraments, Morals and Ethics. Some of the Vincentian administrators willingly spend hours in the classroom but the vast majority of the professors are laymen and women, some of them Ladies of Charity (AID) and members of the Society of St. Vincent de Paul, who have degrees in Catholic Theology.

The importance of the religious teaching can be glimpsed from the fact that the majority of the poor students who study at the University at the tuition fee of $200 a semester, have practically no catechetical instruction in their primary and secondary schools which are run by the government. The introductory course in religion (Theology I) is so basic that even the Buddhists, the Muslims and the Protestants can attend the course without qualms of conscience. As the Philippines is a third world country, the parishes and dioceses around the country can barely afford to sponsor the catechetical instructions in the public schools. 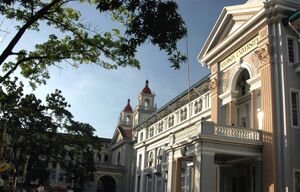 The Vincentian Fathers had a very firm guidance and direction of the Theology Department which was for many years under the chairmanship of a priest, this writer having been the first chairman of said department. The priest-chairman sees to it that the textbooks being used are good, the professors well-qualified, and the teaching-learning experiences beneficial to the students. For the past few years, as many as 25 professors teach in the department of theology, all of them trained in the best theology schools in the Philippines and abroad. Special ongoing formation was given to the theology faculty members in the form of seminars, lectures and special courses in the various theological centers in the country. Some of the theology professors have written textbooks for the use of their students.

Many priests, including this writer, have taught basic theology at Adamson University. As in all courses, the problem was to keep the students interested, communicate enough of the basic Catholic doctrine and to insist that theology is an important part of their lives. The interest of students was enhanced by multi-media presentations, contests and prizes, poster making and painting. One special occasion was the feast of St. Vincent, when all theology students were asked to paint or draw a picture of St. Vincent, write an essay or declaim a poem in honor of St. Vincent de Paul. The classrooms were sources of information and knowledge for the interested priest-professor to get a feel of what the young were thinking about God and their relationship to Him, the various cults in the area, their problems about religion, their parents and their future. There were so many occasions to take care of the young who were not only poor materially but also spiritually and mentally handicapped. 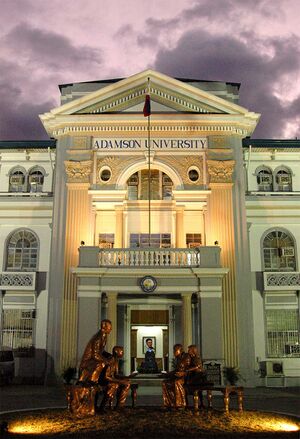 Main building. Jubilee statue in the foreground installed February 7, 2007 to mark 75th anniversary of the school.

All year round, the Theology department undertakes special programs for the students: retreats by groups, special Masses on various occasions, confessions on first Friday, apostolate with the prisoners and the sick, teaching of catechesis in addition to the daily Masses held on campus. Practically all the freshmen and the graduating classes had to undergo a one or two-day retreat in preparation for entering the school year and for graduation year. Generally, the priest-chairman, the campus minister and the five or six priests assigned to the University give the retreat. But due to the large number of retreatants, around 4,000 students a year, other priests from the neighboring areas are asked to help out. For many students, these retreats are the first retreats of their life and they are inspired to take their spiritual life seriously. This is the time when some are encouraged to become priests or nuns. There are dozens of Sisters who were students of Adamson University; many students became Vincentian seminarians and two have been ordained priests.

Campus Ministry is one of the Vincentian arms of the University because of its direct contact with the students who belong to poor families. In addition to their activities they undertake programs which keep them in contact with the less fortunate members of society: "The Campus Ministry also participated in programs for special occasions. Its staff shared in the closing of the International Marian Year Congress on Humanae Vitae; the National Laity Week; the CBCP _ episcopal Commission on the Youth; the Forum on CBCP Pastoral Letter and Challenge to Fundamentalism; the National Bible Year Congress; the Youth Encounter and the Operation Kamay to help earthquake victims. The Campus Ministry's extension services included the PGH Sunday choir, the Annual Day with the Poor at Golden Acres, PPL Depressed area, settlement, etc" (cf. DelaGoza