Since 1617 the extended Vincentian Family has grown to include several hundred diverse groups of women and men, laity and religious, Catholic and non-Catholic.

The Confraternities of Charity, today the AIC: St. Vincent founded the Association of Charity in 1617 in Châtillon. The story of this foundation is very well known. Since its origins its purpose is clearly seen: “To honor Our Lord Jesus Christ, and his holy Mother and to assist the sick poor … corporally and spiritually.”

Vincentian Marian Youth: This came about in 1847 under the influence of the apparitions of Our Lady of the Miraculous Medal to St. Catherine Labouré. Its purpose: “To form members to live a solid faith following Jesus Christ the evangelizer of the poor. To live and pray like Mary, with simplicity and humility, taking on the spirituality of the Magnificat. To arouse, animate and sustain the missionary spirit of the association, especially through missionary experiences to those who are poorest and to youth.”

The Miraculous Medal Association: This association also came into existence within the Vincentian Family from the apparitions of the Blessed Virgin to St. Catherine Labouré. Honoring Mary in the mystery of the Immaculate Conception as the model of the Christian life, “its goal is to venerate Mary conceived without sin, the sanctification of its members, holistic formation in the Christian life and the apostolate of charity, especially to the most abandoned (families and the poor in general). Through its symbol and power, Mary's holy medal offers a model and an aid to attain these goals.”

The Brothers CMM: When the Congregation of the Brothers of Our Lady, Mother of Mercy (Brothers CMM) was founded, Saint Vincent became its patron saint and an inspiring example of evangelical service. For more than 170 years the Brothers CMM have been working in several countries in the fields of education, youth work and in the building up the Church community. Their attention is especially focused on the poor and on youth growing up under difficult circumstances.

The Congregation of the Brothers CMM was founded in 1844 in Tilburg, the Netherlands. The founder, Bishop Joannes Zwijsen, was deeply moved by the poverty he encountered in this quickly growing industrial town and in the countryside around it. Many children received hardly any schooling and there were only limited means to help the sick, the elderly, the orphans and those who were handicapped. To alleviate this situation Zwijsen gathered a group of sisters (1832) and a group of brothers (1844) around him: religious who were eager to dedicate themselves to improve the living conditions in the town and to do this as religious congregations in the Catholic Church.

Ladies of Charity refers to an organization of Catholic lay women volunteers that was founded by St. Vincent de Paul.

St. Vincent de Paul was a parish priest at Chatillon-les-Dombes in 1617, when, on a special Feast Day, a woman parishioner told him of a local family in dire need of help. The entire family was ill and none could care for the others. Vincent spoke of the family's needs during his sermon. As a result of this sermon an outpouring of charity was so spontaneous and abundant that the family was overwhelmed with food and visitors. Viewing the abundance of food and provisions, Vincent said, "This poor family will have too many provisions at one time and some will be spoiled and wasted. In a short time these persons will be reduced to their former state of need. Would it not be possible to induce these good women to give themselves to God to serve the poor permanently.

A few days later, on August 23, Vincent called a meeting of the women of the area and suggested that they band together to carry out this good work. They agreed to form an association in which each would take her turn in serving the poor corporally and spiritually. Thus was the founding of the first of the Confraternities of Charity. The seeds that were planted at Chatillon-lesDombes germinated and flourished in other districts.

By December 8, 1617, the first association of the Ladies of Charity was canonically erected. All subsequent associations were established with the approval of the Holy See. To maintain the spirit of charity and unity among them, St. Vincent chose Louise de Marillac, his devoted cooperatrix to visit the Associations to see that they were properly organized and work was performed in the right spirit. On March 11,1934, Pope Pius Xl canonized Louise and proposed her as a model for the Ladies of Charity.

Congregation of the Mission

From the Constitutions and Statutes of the Congregation of the Mission 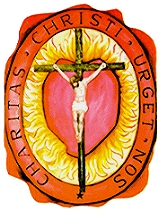 In 1633 Vincent de Paul, a French priest and Louise de Marillac, a widow established the Company of the Daughters of Charity as a group of women dedicated to serving the "poorest of the poor." Prayer and community life were essential elements of their vocation of service with a characteristic spirit of humility, simplicity and charity.

Almost two centuries later, Elizabeth Ann Seton, the American foundress of the Sisters of Charity of St. Joseph's, adapted the rule of the French Daughters of Charity for her Emmitsburg, Maryland community. In 1850, the Sulpician priests of Baltimore successfully negotiated that the Emmitsburg community be united with the international community based in Paris.

Today, the Daughters of Charity are an international community of over 19,900 Catholic women ministering in 91 countries. The works of today include focus on globalization, immigration, and issues of ecology. The Daughters of Charity still serve the "poorest of the poor." Their ministry touches those in need through education health care, social, and pastoral services. Prayer and community life are essential elements for their vocation of service.

Inspired by Gospel values, the Society of St. Vincent de Paul, an International Catholic lay organization, leads women and men to join together to grow spiritually by offering tangible and spiritual support through prayer and person-to-person services to the needy and suffering in the tradition of its founder, Blessed Frédéric Ozanam, and patron, St. Vincent de Paul.

As a reflection of the whole family of God, Members, who are known as Vincentians, are drawn from every ethnic and cultural background, age group, and economic level.

Vincentians are united in an International Society of Charity by their spirit of poverty, humility and sharing, which is nourished by prayer and reflection, mutually supportive gatherings and adherence to a basic Rule.

The Society collaborates with other people of good will in relieving need and addressing its causes, making no distinction in those served, because in them Vincentians see the face of Christ.

Prayer of the Vincentian Family

At the dawn of the new millenium the Vincentian Family faces challenges to develop a deeply missionary spirituality, train people who will imbue this spirituality in others. As a family it must develop collaborative projects. The fourth challenge is to develop, as a basis for its missionary effectiveness, some clear simple tools for praying as members of the Vincentian Family.