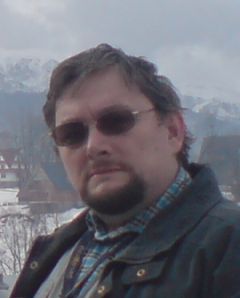 TOMA (heb: ????) in Hebrew means Thomas, one of twelve Apostles. In many European languages name 'Thomas' sounds like 'To-ma' in pronunciation. In may case I became 'Toma' in the first weeks of Internal Seminary, when our French teacher first pronounced my name as Frenchmen do and this word sounded in her mouth so special, that it stuck to me from then on. For years in the Congregation I was "Toma" as often as "Tomasz" (Polish for Thomas). Years later, when I had a book of New Testament written in Hebrew I noticed that biblical "Thomas" is written and pronounced as "Toma" (????) -- one of the disciples who didn't believe until he has seen. But also the one who martyred his life for Jesus far far away in Southern India, as tradition reads.

According to the documents, ny real name is Tomasz Zielinski, born 1965. In September 1984 I entered the Congregation of the Mission in the Province of Poland. Lots of things changed since then. Providence lead me into other way of life. But the Congregation is still deep in my heart and mind. It was , and still is considered as such, a turn point of my life. There is time "before Stradom" and there is time "after Stradom". (For those who are not familiar with the term, 'Stradom' is a common name of CM Provincial House and the Seminary at 4 Stradom Street in Krakow, Poland). Later, one of the confreres said to me: "people like you are never forgotten". Certainly, not everybody who remembers me has positive memories, but everybody has some inevitably.

Second turn point was on the slopes of Mount Carmel. Few months spent in Israel soon before and right after Operation "Desert Storm" involved another of my life decisions. Something has finished, something has started. But my missionary experience remained.

My life went to third turn in June 1997. After being hit by a van on the street, I spent three weeks in Intensive Care Unit in Orthopedic Clinic of University Hospital in Krakow. I was given the second life then. When I recovered and left ICU my surgeon said: "You came back from very long journey. But they didn't want you there where you traveled. Probably You had to do something here...". They added, they do not remember if there were any other patient before me who survived despite having so many broken bones and internal injuries. Perhaps, the surgeon was right. Perhaps I have to do something here.

The old saying, I always refer it to "the Sound of Music" where I heard it for the first time, says: "when Lord closes the door, somewhere He opens the window" proves it is true. Somewhere on Mount Carmel "the door" was closed, but after a time being "the window" was opened for me in the Famvin.org and this widows opened even wider in recent years. The fact I became a part Famvin.org - including creator of its services in Polish: WincentyWiki and Famvin Nowiny and number of social media channels, and the fact there is something I can share with the community allows me to say that being far away from home one can still think about home and feel at home. Only the communication means can change.

If someone wants to learn more about me, say something, ask something, discuss something or simply stay in touch -- simply -- email me You can find me on FACEBOOK , TWITTER or INSTAGRAM

YouTubers can watch me videos in these channels: