(Redirected from Sisters of Charity) 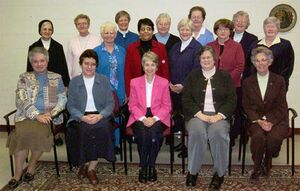 Board of Directors of the Sisters of Charity Federation, March 2008

The Federation has approximately 4,000 members in 13 independent Congregations in the United States and Canada who trace their roots to St. Elizabeth Ann Seton and/ or to St. Vincent De Paul and St. Louise de Marillac, as well as the five U.S. Provinces of the Daughters of Charity.

The Mission Statement of the Federation is:

Impelled by Christ's love and joined together in the mission of Charity, we, the Sisters of Charity Federation, respond to the cries of those who are poor and marginalized.

The Vision Statement of the Federation is:

Impelled by the Gospel charism of Charity, we commit ourselves to be in solidarity with our sisters and brothers who are poor and marginalized. We will use the energy of our love, the gifts and talents of the members of our communities, and our material and spiritual resources to collaborate in the creation of systemic change locally and globally for the common good of all.

On March 28, 2007, Sister Mary Ann Daly, formerly the Administrative Assistant, became the Executive Director of the Sisters of Charity Federation in the Vincentian-Setonian Tradition.

Sr. Mary Ann assists the Executive Committee in fulfilling the tasks assigned by the members at the annual meeting. She serves as liaison to various organizations and committees in the Charity Family for the Federation.

The Federation developed in part to advocate for the Cause for canonization for Elizabeth Bayley Seton.

The Conference remained loosely organized until 1965. The Decree on the Adaptation and Renewal of Religious Life, Perfectae Caritatis, proclaimed on October 25, 1965 by Pope Paul VI stated that:

Independent institutes and monasteries should, when opportune and the Holy See permits, form federations if they can be considered as belonging to the same religious family. Others who have practically identical constitutions and rules and a common spirit should unite, particularly when they have too few members. Finally, those who share the same or a very similar active apostolate should become associated, one to the other.

The Conference developed into a federation in response to this guidance.

American Origins of the Setonian Tradition

The apostolic delegate to the United States, Amleto Giovanni Cardinal Cicognani (1883-1973), recommended that the spiritual daughters of Elizabeth Bayley Seton collaborate to further the cause for canonization of this convert, who was a wife, mother, widow, sole parent, foundress, and spiritual leader. Despite growth pains the Sisters of Charity continued to develop and blossom into independent new congregations in North America: New York (1846), Cincinnati (1852), Halifax (1856), Convent Station (1859), and Greensburg (1870). The conflict-ridden circumstances surrounding the initial separations from Emmitsburg were a source of pain for all involved, especially after French émigré priests belonging to the Society of Saint Sulpice (Sulpicians) of Baltimore arranged for the Sisters of Charity of Saint Joseph's to join (1850) the Company of the Daughters of Charity of Saint Vincent de Paul (D.C.) of Paris, France.

The Federation focused almost exclusively on promoting the Cause of Elizabeth Bayley Seton for sainthood until 1975. The Seton cause was introduced in Rome in 1940. Blessed John XXIII declared Mother Seton venerable December 18, 1959, and also presided at her beatification March 17, 1963. Pope Paul VI canonized her as Saint Elizabeth Ann Seton September 14 during the Holy Year of 1975 and the International Year of the Woman.

After their successful collaboration on the Cause for canonization, the Federation focused on joint projects related to charism, formation, and mission. Member congregations explored the triadic base of renewal recommended by Vatican II--the Gospel, the signs of the times, and the original spirit of the founders--and came to a new awareness of and appreciation for their shared heritage and stewardship responsibility for the Vincentian and Setonian charism expressed through the Tradition of Charity (Cf. Perfectae Caritatis, §1-2).

During the annual meetings of the Federation, members considered strategies to make their shared charism more effective in the modern world, especially in the areas of social justice, spirituality, and renewal programs (1974). Members explored the feasibility of common study of the charism which led them to adopt a resolution (1977) to encourage each community in the Federation to engage in ongoing study, reflection, and sharing of the lives of Vincent de Paul, Louise de Marillac, and Elizabeth Bayley Seton. One result was the initiation (1988) of Charity: A Shared Vision, an ongoing formation program. A later outcome was the first of several scholarly symposia to explore the historical and theological relevance of The Seton Legacy (1992). The Vincentian Studies Institute collaborated with the Federation and published the proceedings of the symposia and annotated listings, by repository, of the writings of Elizabeth Bayley Seton in The Vincentian Heritage. The Federation launched (1999) a new project Charity 2000 & Beyond to provide another series of ongoing formation opportunities.

Federation members committed themselves to seek effective strategies for human development, to promote investment in minority enterprises, and to make corporate responses to social justice issues as early as 1973. Subsequently, members sought ways to study unmet human needs and resources (1979) with the goal of coordinating and networking among already existing ministries which respond to neighbors in need (1987). In order to be more effective advocates on peace and justice issues, the Federation gained recognition as a Non-Governmental Organization (NGO) at the United Nations in 1997. Sister Maria Elena Dio, S.C. (Halifax), was the first representative of the Federation to the Department of Public Information at the United Nations.

Perfectae Caritatis: Decree on the Adaptation and Renewal of Religious Life