Start with these facts: four hundred people banished because of leprosy build a community of sorts in a cemetery. They dwell among the grave stones in tiny huts built of trash. Vultures circle overhead; below, dogs forage and foul; underground, some in graves perhaps not deep enough, are decomposing human remains.

In this dreadful environment, Daughters of Charity saw the possibility for healing and change that would shift the reality and possibilities for people who might have thought their lives were beyond hope.

Over three years, Sister Tsigue and Sister Ayelech first brought direct help of food, water and clothing. And they began to educate both the children and the village leaders.

Education for the elders included learning about justice. About, for example, the responsibility of the greater community to promote the common good. 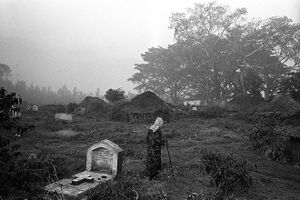 Maryam Village, prior to obtaining good land. Mounds between graves are huts.

And the Sisters called the community to action.

Together, the sisters and elders began to visit the local municipality to demand land for the 58 families of the village. At first, the municipality did not respond favorably. In an effort that calls to mind Jesus’ parable of the widow who sought justice from the unjust judge, the Sisters and the village elders visited the municipality more than 250 times in the course of three years.

Finally their persistence paid off. The Maryam Village community was given a parcel of good land outside the city.

The Daughters obtained funding from an European Foundation for housing and a grant from the Seton Institute to construct a water system for clean water.

The Maryam Village project provides a model of Catholic social teaching in action: promoting the common good and the dignity of every human person. Systemic change is about just such principles.

Frederic Ozanam urged Vincentians to consider the pursuit of justice and related principles even before the Rerum Novarum. He said, “Charity is the Samaritan who pours oil on the wounds of the traveler who has been attacked. It is justice’s role to prevent the attacks.”