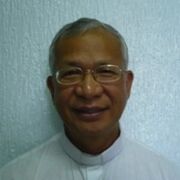 Rolando Crisosotoms Santos was born on march 21, 1949 in Malabon City, Rizal, Metro Manila, Philippines. After elementary school he continued education in the Vincentian Minor Seminary of St. Vincent de Paul in Valenzuela City, Bulacan, (neighbor to his hometown). He entered Congregation of the Mission in the Province of Philippines in 1966 and took two years of Internal Seminary in the Vincentian Hills Seminary, Angono City, Metro Manila. To continue his philosophy and theology studies he was sent to US Eastern Province of the Congregation to the Mary Immaculate Seminary, Northampton, PA. He took his vows on June 17, 1971 and was ordained priest June 1, 1974

During the first year after ordination he was a formator in the Seminary of St. Vincent Ferrer, Iloilo City, Philippines. Next, 1975 - 1981 took post of parochial vicar and pastor in Calumpang, Iloilo City. For two years since 1981 he was Director of Internal Seminary in the Vincentian Hills Seminary, Angono City, Rizal. In 1984 - 1987 he held position of the Rector of Vincentian Seminary of St. Vincent, Tandang Sora, Quezon City, Metro Manila. Meanwhile in 1983 and 1984 he was involved in the pastoral ministry as member of provincial Mission Team.

In 1987 he was appointed Director of Daughters of Charity Province of Philippines, and additionally vicar of National Shrine parish of Miraculous Medal in Muntinpula City, Rizal and the superior of community house in the Shrine until 2001.

In 2001 he was sent to Papua New Guinea and became Spiritual Director and Econome in the Holy Spirit Seminary in Bomana, in the archodiocese of Port Moresby. In 2008 and 2009 he held position of Secretary General of the Catholic Bishops Conference of Papua New Guinea and Solomon Islands.

In 2009 elected Visitor of the Province of Philippines continued to be superior of the Vincentian missions in Papua New Guinea and Solomon Islands. Recently he was also chairman of Asia - Pacific Visitors Conference (APVC).

April 6, 2011 Pope Benedict XVI named him the fourth Bishop of Alotau-Sideia Diocese in Papua New Guinea located in the Eastern cone of the island of New Guinea on the shore of Milne Bay. Bishop's Seed is in the city of Alotau, capital town of Milne Bay Province. In 1946 it was erected an Apostolic Prefecture and ten years later elevated to Apostolic Vicariate. It became a diocese in 1966 and in 1975 changed its name to the present one. Diocesan Seed was vacant since March 18, 2010 when bishop Francesco Panfilo SDB was nominated bishop of diocese of Rabaul, Papua New Guinea. Msgr Santos will be the fourth bishop oa Aloatu-Sideia Diocese itself is spanned on the 20,000 km2 territory with population of 245,000. 16,8% of the populition are Roman Catholics (41,137 people). There are 16 parishes with 22 religious priests, 2 diocesan and 1 permanent deacon. There are 25 Religious men and 40 Religious Women there.