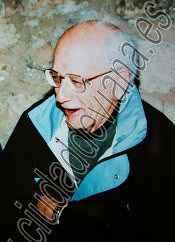 Rafael Sáinz Ripa was born on November 17, 1926 in Viana, province of Navarra, Spain. He had two brothers Eliseo and Pelayo who were diocesan priests. He studied Humanities in Pamplona and Murguía. Admitted to the Congregation of the Mission in then Province of Madrid on September 22, 1943. He took his Internal Seminary course in Hortaleza. Next he studied Philosophy in Cuenca and Theology in Rome. Ordained priest on September 9, 1951. After ordinations he was engaged in various educational ministries of the Province of Madrid in Potters Bar, Hortaleza and Cuenca. On General Assembly in 1968 he was elected Vicar General of the Congregation. He hold this post in the time when General Curia was moved from Paris to Rome.

In 1980 returned to Spain. On April 17, 1982 elected the Visitor of Province of Zaragoza and reelected on May 1, 1985. He left this post in 1988. Next he dedicated himself to Vincentian studies and spiritual formation of Daughters of Charity, Vincentian Youth movements and Internal Seminary. Since 2004 he has stayed in the infirmary of Vincentian residence in Pamplona.