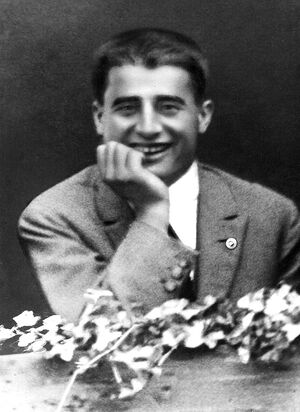 According to the biography written by his sister, Luciana Frassati, as a child Pier Giorgio once answered the door of the family home to find a mother begging; her son, shoeless, was with her. Pier Giorgio gave the boy his own shoes.

In 1918 Pier Giorgio joined the Saint Vincent de Paul Society. By that time, he had decided to study to become a mining engineer in order, in his words, "to serve Christ better among the miners."

At graduation from school, his father presented him with a choice of money or a car. Pier Giorgio chose money and then distributed the gift to the poor. In other acts of charity, for an old woman evicted from a tenement he found a place to stay, he provided a bed for a tuberculosis sufferer, and he supported three children of a widow who was ill. These things and others became known to his sister because he kept a detailed record of his funds and, on his deathbed, gave instructions to her about how to continue caring for those who depended on his help.

Pier Giorgio was an avid mountain climber and, like other offspring of the well-to-do in Turin, he frequented theater and museums. He could quote passages of Dante.

In 1922 he became a member of the Third Order of the Dominicans taking as his name Girolamo, the Domincan preacher and reformer. Along with his own direct service to the poor, he was active in causes for political reform. He said, "Charity is not enough: we need social reform." To this end, he helped to establish the Catholic daily newspaper Momento, which was based on Rerum Novarum, the encyclical in which St Leo XIII articulated principles of social and economic justice.

In late June, 1925, Pier Giorgio became acutely ill with poliomyelitis. In addition to instructions he gave his sister as he lay dying, he also wrote a note to a Saint Vincent de Paul Society friend regarding their Friday visits. He died on July 4, 1925 at the age of 24. Thousands of residents of Turin, knowing of his seven years of service to the poor, stood in the streets to pay respects as the cortege passed. These were the people who petitioned for his canonization; a cause was opened in 1932 and he was beatified by John Paul II on May 20, 1990.

Blessed Pier Giorgio Frassati, a Saint for the Youth of the Third Millennium