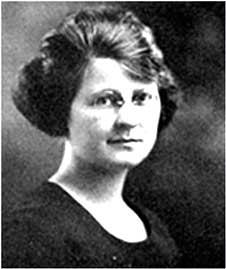 Bl. Miriam Teresa Demjanovich, a Sister of Charity of Saint Elizabeth, was born 26 March 1901 in Bayonne, New Jersey USA. She was baptized and confirmed in the Byzantine-Ruthenian rite of the Church on 31 March 1901. The youngest of seven children, five of whom survived infancy, she was the daughter of Alexander and Johanna (Suchy) Demjanovich, immigrants to the United States from the area now known as Eastern Slovakia.

At the time of Teresa's high school graduation in January, 1917 she wanted to become a Carmelite, but stayed in the family home to care for her mother, who was ill. Following her mother's death in the influenza epidemic of November, 1918 her family encouraged her to enter the College of Saint Elizabeth at Convent Station, New Jersey. In September, 1919 she did so, majoring in literature. She received a Baccalaureate in Letters on 14 June 1923, graduating with highest honors. In 1923-24 she taught at the Academy of Saint Aloysius in Jersey City, New Jersey.

During summer and fall of 1924, Teresa prayed to discern the direction of her life. She visited the Carmelites in the Bronx. Because of several health issues, including headaches, they suggested that she wait a few years before applying. She was part of the Saint Vincent de Paul Parish choir, the Blessed Virgin Sodality, and a parish community associated with the National Catholic Welfare Conference. For the Feast of the Immaculate Conception that year, Teresa made a novena. Teresa decided upon her vocation to the Sisters of Charity, Convent Station on 8 December 1924 and and planned to enter the Sisters of Charity of Saint Elizabeth on 2 February 1925. But her father caught cold and died on 30 January. Consequently, her entrance was delayed until 11 February 1925, the Feast of Our Lady of Lourdes. Her priest-brother, Charles Demjanovich, and two sisters accompanied her to the convent. She received the religious habit on 17 May 1925. 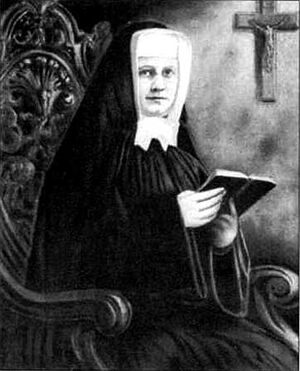 As a postulant and novice, Teresa taught at the Academy of Saint Elizabeth, Convent Station in 1925-1926. In June, 1926 her spiritual director, Father Benedict Bradley, OSB, asked her to write the conferences for the novitiate. She wrote 26 conferences which, after her death, were published in a book, Greater Perfection. The contents of the book are:

In the final section she wrote:

Union with God, then, is the spiritual height God calls everyone to achieve – any one, not only religious but any one, who chooses, who wills to seek this pearl of great price, who specializes in the traffic of eternal good, who says ‘yes’ constantly to God…The imitation of Christ in the lives of saints is always possible and compatible with every state of life. The saints did but one thing – the will of God. But they did it with all their might. We have only to do the same thing; and according to the degree of intensity with which we labor shall our sanctification progress.

Sister Miriam Teresa's religious profession was made in articulo mortis (danger of death) on 2 April 1927; she was operated on for appendicitis on 6 May 1927 and died on 8 May 1927. Her funeral was held 11 May 1927 at Holy Family Chapel in Convent Station, New Jersey and she was buried at Holy Family Cemetery on the grounds of the Motherhouse of the Sisters of Charity of Saint Elizabeth.

The League of Prayer was founded in 1946 to honor the Blessed Trinity through the Immaculate Heart of Mary by spreading knowledge of Sister Miriam Teresa's life and mission and by working for her Cause.

The Ordinary Processes of the Cause for the Sainthood of Sister Teresa (the process which takes place with the diocese)were completed in the 1970s. Testimonies of the Apostolic Process were held from 18 May 1981 to 18 December 1981. The final portion of the Positio super virtutibus (report about virtues) was brought to the Congregation for the Causes of Saints. A miracle, restoration of perfect vision to a boy who was legally blind because of macular degeneration, was investigated by the Newark Archdiocesan Tribunal. Subsequently, on 8 July 2005 a ceremony at the Cathedral Basilica of the Sacred Heart in Newark, New Jersey marked the end of the investigative process for Sister Teresa's beatification. Documents were sent to the office of the Apostolic Nuncio in Washington, D.C. and sent from there to Rome.

As a young nun, Teresa composed 'Litany of Love':