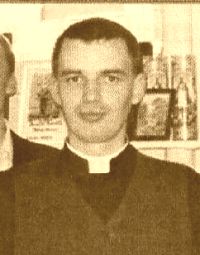 Lukasz Sorys, (Luke Sorys) is born in Bochnia, diocese of Tarnow, Poland on February 16, 1981. Later his family moved to Tarnow, and he grew up in the Holy Family parish there, founded and staffed by Vincentians. After graduation from high school, on December 8, 2000, he is received into Congregation of the Mission (Province of Poland) at Stradom House, Krakow. He takes Internal Seminary course and starts theological studies in the Vincentian Institute of Theology (Instytut Teologiczny Ksi??y Misjonarzy).

In 2006, ahead of third year of Theology course, he is transferred to Province of New England of the Congregation of the Mission. He moves to United States where he continues his studies. On January 25, 2007, in the Church of St. Stanislaus Kostka, Greenpoint, Brooklyn,(Polish Vincentians staff this church since 1923), Luke takes permanent vows in the Congregation. Next he is assigned to assist in their ministry confreres in the SSt. Cyril and Methodius Church, Brooklyn, NY. There, on April 21, 2007 he is ordained permanent deacon by Msgr Octavio Cisneros, Auxiliary Bishop of Brooklyn. Again, he returns to St. Stanislaus church on Greenpoint engaged in the parish ministry and theological studies.

On February 15, 2009, in the same church, Luke Sorys CM is ordained priest by Msgr Octavio Cisneros. He is the first priest ordained in the Province of New England in 21st century and in the second century of Polish Vincentians presence in United States.