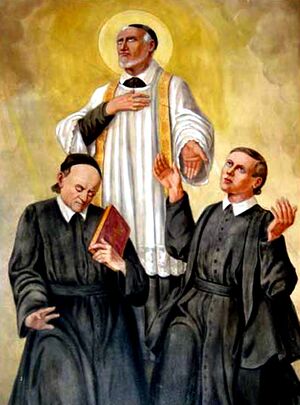 Louis-Joseph François was born in 1751 in northern France, the son of a farmer. When he finished his secondary education he joined the Congregation of the Mission. After ordination he worked in seminaries as professor and superior. In 1786, at the end of the 15th General Assembly, he was appointed Secretary General. He became famous as a preacher for special occasions and some of his more important sermons were printed and published. When he spoke at the Tuesday Conferences more than the usual number of priests turned up to hear him. In the summer of 1788 he was appointed superior of the former Collège des Bons Enfants. At this time it was known as Saint-Firmin, after a bishop of Amiens who was the titular of the seminary chapel. The name had been changed earlier in the century as it had been thought that the name Bons Enfants was possibly discouraging boys from entering. François was chosen as being someone who could carry on, and complete, a programme of renewal, which had started after the 1774 General Assembly.

A year after his appointment to Saint-Firmin came the fall of the Bastille, on 14 July 1789; the mother-house of the Congregation, Saint-Lazare, had been attacked and vandalised the previous evening. In November of that year the National Assembly voted that all Church property be confiscated. François wrote and published a pamphlet against this decision. The actual confiscation of property did not start till April 1790, and at the same time a decision was taken to do everything possible to turn the population against the Church and the clergy. In May discussions began on what was known as the Civil Constitution of the Clergy, and it became law in July. It laid down that the Pope had no authority in France, and that bishops and priests would be elected by a panel of citizens.

January 9, 1791 was the day fixed for all priests in Paris to take an oath of fidelity to this Constitution. Some priests took the oath because they agreed with the Constitution; some took it because they thought the wording was sufficiently vague to allow them to do so with a clear conscience; others refused to take it because they saw the real intention behind it. François, having thought about it from every point of view, produced another pamphlet before the end of January, called Mon Apologie. It explained why he would not take the oath and why no priest should take it; it went through at least seven editions. He brought out six other pamphlets in three months.

The number of priests who refused to take the oath surprised the authorities. Also, many who had taken it, when they saw the numbers who did not take it, retracted their oaths and published their retractations in the newspapers, where they did great good. The authorities drew up an Instruction, which they ordered to be read in all churches; François wrote another pamphlet against it.

The authorities then tried a new approach. They invited all priests who had not taken the oath to resign their parishes or other posts and to live in retirement on a State pension. François immediately brought out another pamphlet called No Resignation. He pointed out that priests did not have the right to resign, and secondly that even if they had they should not. All his pamphlets had great effect on priests who were puzzled or hesitant about the real significance of the oaths, and helped them to make up their minds not to take the oaths. He also paid attention to those who had sworn, and wrote a pamphlet called There is Still Time. Pope Pius VI condemned the Civil Constitution of the Clergy; the French authorities condemned the Pope's letter; and François then condemned the French government's letter. In November 1791 there was a new form of the oath, with various penalties for those refusing to take it. The King refused to sign this into law and François brought out another pamphlet supporting the king; it was his last.

Joseph Boullangier, the bursar in Saint-Firmin survived the Revolution and later he wrote:

Fr François was one of the most zealous and best defenders of the Catholic, Apostolic, and Roman religion against the oath demanded from priests by the French National Assembly, and also against the writings of those in favour of the oath.

By 1792 there were, of course, no seminarians in Saint-Firmin. François had kept up good relations with the civil authorities in that part of Paris, and because so much of the seminary was empty he let some rooms to the city authorities as offices. He made the rest of the rooms available to refugee priests who had fled from persecution in their own districts.

On 10 August 1792 power in the city of Paris was taken over by a small radical group. They drew up a list of all priests who had not taken the oaths and decided they would be imprisoned in the Carmelite house in rue de Vaugirard and in Saint-Firmin. On the 13th a guard was placed on Saint-Firmin and everyone inside thus became a prisoner. New prisoners were sent there and by the end of August there were definitely ninety-seven, and possibly more, in the seminary.

Joseph Boullangier, whom I have already mentioned, was the bursar and because of his duties he was allowed move freely around the house. On the evening of 2 September the butcher's boy told Boullangier that all the priests in the house were going to be massacred the following day. Boullangier reported this to François, who was not inclined to take it seriously. When Boullangier returned to the kitchen the boy and two of his friends dragged him out of the house, and so he escaped the September Massacres. By that time about two hundred priests imprisoned in the Carmelite house had already been killed.

At 5.30 the next morning, 3 September, the mob attacked Saint-Firmin. François tried to plead with the civic officials, who had offices in the building, for the lives of the priests. Some of these men were against killing priests, but some of the mob went for François, because of the trouble he had caused with his writings, and threw him out of the window into the street below, where a group of women battered him to death with wooden clubs.

Seventy-two were killed in the seminary that day, and they were taken off and buried secretly in different unmarked graves.

It would appear that this was not a random mob, but a carefully organised group who were paid to to do the work.

(From a talk by Thomas Davitt, CM on martyrs of the French Revolution) Louis Joseph Francois