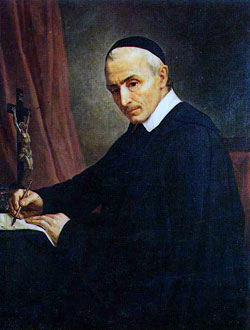 Blessed Marco Antonio Durando was born May 22, 1801 in Mondovi, Italy and died December 10, 1880 in Turin, Italy. A priest of the Congregation of the Mission, he founded the Institute of the Sisters of Jesus the Nazarene.

The decree of Blessed Durando’s “heroic virtue” was made on July 1, 2000; on December 20, 2001 Pope John Paul II approved recognition of a miracle attributed to Blessed Durando, which paved the way for beatification, which occurred on October 20, 2002.

Marco Antonio grew up in Mondovi in a relatively affluent family, the son of a mother who imparted her religious beliefs and practices to her eight children and a father whose interests and beliefs were secular, verging on agnostic.

At age 15 Marco Antonio declared his interest in going to China as a missionary and subsequently entered the Congregation of the Mission. He made perpetual vows at age 18 and at Casale Monferrato was ordained a priest on June 12, 1824.

Instead of being sent to China, from 1829 until his death Marco Antonio served at the house of Turin. He preached missions throughout Piedmont, in which he emphasized God’s mercy. In the course of the missions, he also worked to instigate direct service to the impoverished. Two years after his arrival in Turin, he was named Superior. One of his early efforts was to help bring the Daughters of Charity to Piedmont, where they served in civilian and military hospitals. He sent them to the battlefront of the Crimean War in 1855.

Another early initiative of Marco Antonio’s was the propagation of the Marian Association of the Miraculous Medal among young people. The Association became a fertile ground for vocations; in only ten years, 260 young women of the area joined the Daughters of Charity. The increased numbers made possible the development of centers in Turin where the Daughters collaborated with the Ladies of Charity to provide service to the poor: orphanages, nursery schools, assistance for the sick, workshops for young women, and more.

In 1837 Marco Antonio became Superior of the Province of Northern Italy, a position he held until his death. In this capacity he preached retreats for priests and provided spiritual direction, at the request of the archbishop of Turin, to the Sisters of St. Joseph. He served other communities of women religious, including the Sisters of St. Ann, the Poor Clares, and the Repentant Sisters of St. Magdalene. In 1855 he founded the Brignole-Sale School, the purpose of which was to prepare priests to serve in foreign missions.

When approached by young women who were not able to enter religious communities because they did not meet canonical requirements, he sent them to serve the sick in their homes, an early kind of in-home hospice care. Servant of God Luigia Borgiotti agreed to become their leader. This group became known as the Company of the Passion of Jesus the Nazorean.

In 1928, 48 years after Marco Antonio’s death, the cause of beatification began in Turin. The apostolic process began in Rome in 1940 and culminated in 2001.

The Unedited Collection of Letters of Blessed Marcantonio Durando